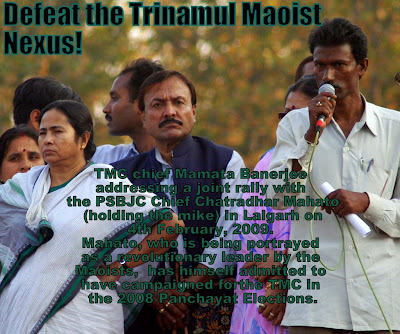 On 03-10-2009 the “Ananda Bazar Patrika” a widely circulated Bengali daily in West Bengal has published in details a telephonic interview of one of the top Maoist leaders Koteswara Rao @ Kishenji. In the interview he has said that Mamata Banerjee is the fittest person to become the next Chief Minister of Bengal. So his organization wants to see her reaching the position and he also advised her to snap her ties with the Congress. He supported all the decisions and activities of TMC and at the same time opined that Mamata Banerjee and her party alone is enough to gain majority in the next assembly elections to be held in 2011. He has also advised her in details how to act after becoming the Chief Minister.

There is no denying that Mamata’s affectionate relations with Maoists are a ground reality and an open secret in the politics of West Bengal. The Maoists have time and again admitted in various documents published from time to time that their armed cadres are with Mamata Banerjee at Nandigram, Singur, Lalgarh, Jangalmahal, Keshpur, Garbeta and other places. They consider her as their most trusted ally and as the only alternative to the Left Front Government.

In this connection, it would not be out of place to mention that very recently Shri Ved Maroa, Chairman, Task Force relating to national security has submitted a detailed report to the Home Ministry alerting it about the large scale infiltration of Maoists in the Trinamool Congress. The infiltration is so much that now Maoists want Mamata Banerjee as the next Chief Minister of Bengal so that they can infiltrate into the administration.
As a matter of fact, the Maoists believe in the 'annihilation of class enemies' and in extreme violence as a means to secure organizational goals. It has affirmed its commitment to the classical Maoist strategy of 'protracted armed struggle' which defines its objectives not in terms of the seizure of lands, crops, or other immediate goals, but the seizure of power. Within this perspective, participation in elections and engagement with the prevailing 'bourgeois democracy' are rejected, and all efforts and attention is firmly focused on 'revolutionary activities' to undermine the state and seize power.
Dr. Manmohan Singh considers the Maoists as the single largest threat to the international security of the country.
The terrorist organization has already created a reign of terror in various parts of the country. Thousands of people and police personnel have already been butchered by it. Hundreds of bridges, railway stations, schools, mobile towers and other national properties have been blown. It has been able to create a large quantum of free zone with the help of antinational terrorist outfits supported, financed and guides by inimical countries and forces across the border.
Considering large scale terrorist antinational activities this organization has already been banned by the Central Government. But it is surprising to see that one of the important Central Cabinet Ministers and six other Ministers of the State belonging to TMC are actively and directly hand in gloves with this outlawed organization. Mamata Banerjee holds one hand to Dr. Manmohan Singh and the other to the Maoists. Her political platforms and various official railway functions are shared by well known Maoist-Naxalite terrorists, and pro-Maoist intellectuals. This has been sending wrong signals not only to the people of this nation but also abroad.
With the arrest of dreaded Maoist terrorist Chatradhar Mahato from Lalgarh, more and more startling and shocking disclosures about the unholy alliance of Mamata Banerjee with Maoists are coming to light.
The people of the country are very much confused and aggrieved over this alliance and hobnobbing of Mamata Banerjee with a banned terrorist organization. Mrs. Sonia Gandhi, Chairperson of UPA, Dr. Manmohan Singh and Shri P. Chidambaram should, therefore, clarify in details the whole matter and their stand to the nation immediately.
Posted by PEOPLE'S VOICE at 6:37 AM

"Death is the solution to all problems. No man - no problem."