THWART THE ANTI-DEVELOPMENT POLITICAL CONSPIRACY OF THE OPPOSITION: JYOTI BASU 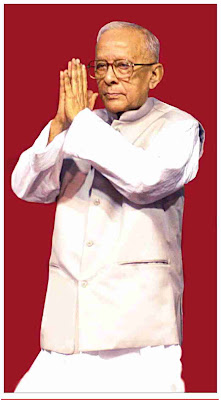 IN a long interview published in Ganashakti daily on March 28 , former Bengal chief minister Jyoti Basu has spoken on various issues concerning development and opposition to it.

ON INDUSTRIALISATION DURING JYOTI BASU’S TENURE AS CHIEF MINISTER AND PROSPECTS:

Bengal could reach its present position overcoming a lot of obstacle. We must occupy the prime position in industrial development in the country soon. Despite our efforts, we have had to confront and overcome a series of obstacles. The obstacles principally comprised central policies including freight equalisation policy, license raj, and the discouragement shown to industrialists about investing in Bengal.

From its inception, the Bengal Left Front government gave priorities to land reforms, agricultural growth, decentralised rural democracy through the Panchayat system, seat reservation in the Panchayats for women, voting rights for those 18 years of age, improvement in agri-production, emphasising on cottage and small scale industries. We have underwritten the interests of the poor, the khet mazdoors, and the share-croppers. We have redistributed land among the landless.

Our Left Front government would never run from the Writers’ Buildings—we move forward taking along all workers, employees, officers, and above all, the mass of the people in all our endeavours. Decentralisation of administrative and financial powers has been done to ensure the involvement of every section of the people with the act of development. What became an obstacle was the policy of discrimination and deprivation of the union government.

We can cite examples of such obstacles. We had to wait for 11 years merely for the permission to set up the petro-chemicals complex at Haldia. In addition, when we approached prime minister Indira Gandhi for the electronics complex at Salt Lake, the response after a period of one year was that permission could not be given because it was near the Bangladesh border. We then went ahead on our own to allot 300 acres of land for the complex to be set up. Today more than 30 thousand young men and women work at that complex.

We had reckoned with the existing problems and had started work on setting up new industrial areas. Problems included that of power, and this was because all the agencies, including the planning commission and the central government itself had erred. The typical response of the then Congress-run union government to our request for improvement in power generation was that there would not be any further demand for power in Bengal. Then we came to office and set up the Bakreshwar plant and the Kolaghat plant. CESC set up plants at Budge budge and Titagurh. Slowly the power situation took a turn for the better. A better ambience for industrial investment was created. There was a problem of navigability in the Ganges River because of silting. We have repeatedly drawn the attention of the union government in this regard.

Following the changes wrought in the union government’s policies, license system was scrapped and the freight equalisation policy partially withdrawn in the new economic policy of 1991. I would urge upon the entrepreneurs and industrialists to invest in Bengal. I would ask the workers to enhance production. The workers must struggle for their hard-earned rights. They must also look to the interest of the industry itself.

In the past, some industries had grown during the Congress regime when Dr B C Roy was the chief minister. We had not posed any opposition to the initiatives. Durgapur went into a depression but now a fresh wave of investment has appeared.

The Left Front government declared its industrial policy in 1994. The issue was discussed in the Party and was approved at the 1995 Chandigarh Party Congress. The capitalists invest for profit. Industry is needed for development. We welcome foreign investment and technology in mutually beneficent and appropriate sectors. We welcome indigenous investment without forsaking or weakening state sector and joint sector. We have travelled across USA, England, and Japan explaining our stand. The investors there had shown interest.

There was a negative propaganda against Bengal. We have had to face questions at places like the London School of Economic, University of Berkeley, and Oxford. We had to iterate that there was good work culture in Bengal. Over the years, the misgivings have gone. I have also gone to Holland and Germany. Siemens could be brought back. In the past, Bengal had been at the top of the list of industrialised states. We must get back to that position. From the efforts put in by the present chief minister and his colleagues, this will be a possibility sooner rather than later.

PROBLEMS OF INDUSTRIALISATION AND THEIR RESOLUTION:

For long periods, we have had effective success in agriculture. We have secured complete self-dependency in food production. We are not out-of-our mind that we would destroy our agriculture and build industries. The principal is to set up industries where there is fallow land. If such land were not available in quantities, we would go in for single-crop, and later multi-crop land. The Tata motors were shown land parcels for the automobile factory elsewhere and they chose Singur. The industries minister has explained the terms and conditions involved. There has been provision made for compensation and rehabilitation. Other proposals for investment are in the pipeline: Jindal’s steel project at Salboni, Videocon in north Bengal. There are no problems regarding land in these projects. We want an even growth in the state. Big players in info-tech are coming: Wipro, IBM, Cognizent etc. We need land for industries and we must enhance the level of consciousness. We must tell them that industrialisation is needed to tackle the problem of unemployment. We had not anticipated the reaction of the people that would occur in this way. We should have taken steps earlier to increase the people’s consciousness. Some amount of perplexity has persisted. This state-of-affairs will surely pass.

OPPOSITION TO DEVELOPMENT AND TACKLING THE ISSUE:

The opposition is engaged in political sabotage to deter the developmental efforts. They are not able to fight politically. They have all banded together—the Trinamul Congress, the Maoists, the Naxalites, and the SUCI. The extreme right has joined hands with the extreme left. The role of the Congress is not at all good. The chief minister has repeatedly said that if the people of Nandigram do not want industries, there would be no industry set up there. Nevertheless, peace would not return even then and certain developments occur! We have to be more careful about land acquisition. Land maps have been created now and we have to move according to the maps. A huge amount of lies are uttered in campaign of disinformation against us about Nandigram, and such campaign had taken place in the past as well especially in 1967 and 1969, and after 1977. We must take to the streets and through campaign, profile the real picture before the people.

THE MISUNDERSTANDING AMONG LF PARTNERS:

There should not be a front within a front. We exhort upon the constituents not to forge such fronts. This will weaken the LF and give advantage to the opposition. The United Fronts of 1967 and 1969 broke up and yet, it was through campaign-movement that Left Front grew up later. The LF fought the 1977 elections and won. One or two members of the LF raise the issue that they are not able to know everything that goes on. If there is such lack of coordination, we have to acknowledge it and take corrective measures. The process of discussion must go on. There should be bi-partite discussions held as is being done now, and later the discussion carried onto the LF meetings. The people must realise that it is the government of the Left Front and not of the Party alone. The core committee must be made more active. However, all problems must be tackled at the level of the Left Front. Separate meetings would hardly be of any use.

The major principals of the LF government must be decided at the level of the Left Front. The LF must take decisions based on discussions. The LF government would then take the next steps based on the principal decisions taken at the LF. There would be a review later on regarding the steps taken. The implementation process must be further accelerated. The work of the various government departments must be reviewed. The ministers of our Party must review the work of the departments they run. Similarly, the ministers of the constituent parties running their respective departments must review their work. Review must be made of pending developmental projects like the Teesta project of the irrigation department and the road projects. Through such efforts, the successful implementation of the state LF government’s projects would be ensured.

TASK OF THE PARTY WORKERS NOW:

There had been some misunderstanding over the recent developments including that in Nandigram, among our LF constituents, and within the Party. We have held state committee meetings. We have taken a united decision to tackle the present situation. The opposition is indulging in lies and misleading the people. At the same time, they are murdering our Party workers, and ousting them from their places of residence. These are all works of sabotage. This had happened earlier in Keshpur in Midnapore. We had said then that they must return to their places of residence before the autumn festival.

At Nandigram, several thousands of people have been rendered homeless. Normalcy must be returned as soon as possible. We have learned from the Keshpur experience. We shall not allow anarchy to happen in the state. The big responsibility on our Party workers is to tackle the situation unitedly.

IMPLEMENTATION OF THE LF GOVERNMENT’S PROGRAMME IN THE DAYS AHEAD:

The LF government works within an ambience of limitation. The LF government is not in a position to set up Socialism. It will try to safeguard and advance the people’s interests within its limited capabilities, to the greatest extent possible. The power of the LF government lies in its pro-people outlook. Running such a government within the parliamentary system is an example, here in this country, and abroad. We have received a massive support from mass organisations of workers, peasants, students, youth, women, refugees, et al.

I retired from government on the eve of the formation of the sixth LF government. Buddhadeb Bhattacharjee then deputy chief minister, assumed the responsibility of the chief minister. The government has worked with success. We had gone deep amongst the people in the run up to the last Assembly elections, and we had explained the pro-people policies of the Left Front government.

"Death is the solution to all problems. No man - no problem."